12U Otters Improve to 10-2 with Sweep of Breckenridge

The Otters 12u baseball team swept Breckenridge on Tuesday night by the scores of 10-8 and 13-4. 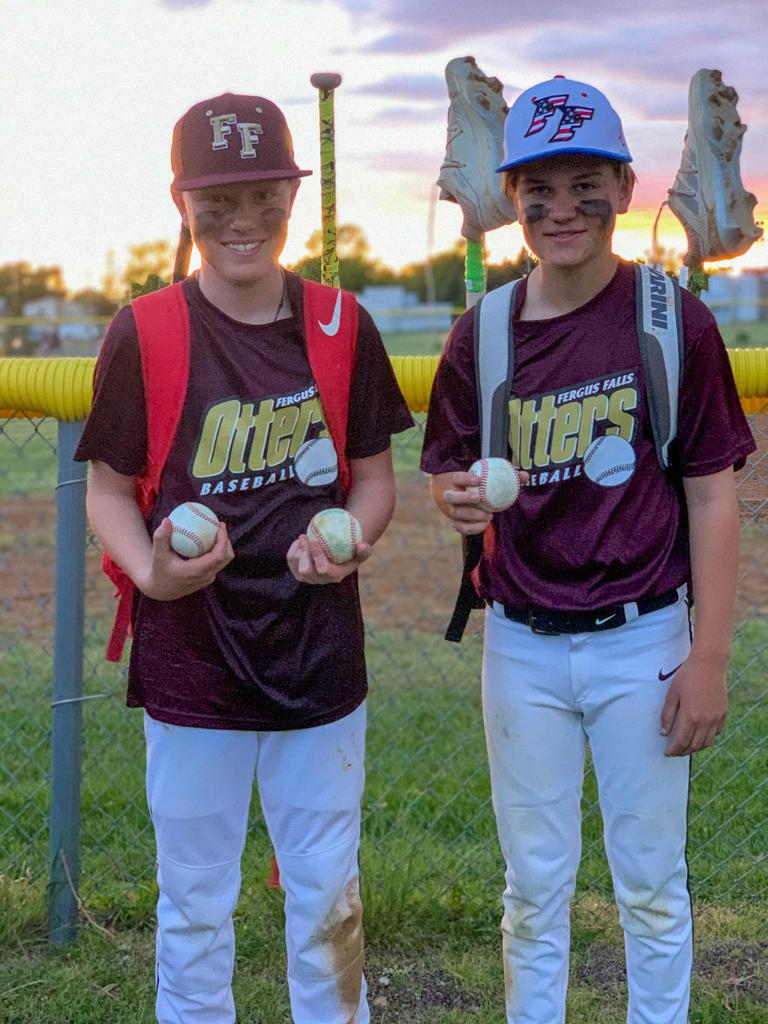 The young Otters were led at the plate by Nolan Felstul (left) who went 4-7 (2 HRs & 2b) for the doubleheader with his first two home runs of the year in the second game and Brody Krein (right) who went 3-5 (HR and 2 2bs) with his first home run of the season in the first game.

In the first game, the Otters jumped out to a 2-0 lead in the second with Jacob Jenc and Kadyn Zender singling and scoring. The Otters added 4 more in the 3rd with Krein (2b), Jenc (1b), Hunter Welle, and Kellen Funkhouser all scoring. The Cowboys fought back in the bottom of the third by scoring five runs. After a scoreless 4th for both teams, the Otters tacked on four runs with Felstul doubling and coming around to score on Krein’s bomb over the center field fence. Hunter Welle and Funkhouser also singled and scored in the inning. Breckenridge put a scare into the Otters in the bottom of the fifth by plating 3 runners and closing the gap to two but Caleb Fronning came on and shut the door and save the game for the Otters.

In the second game, the Cowboys took the lead in the bottom of the first by scoring two runs. The Otters responded in the top of the second with Zender walking and coming around to score on Benett Thielke’s single. Thielke scored on a passed ball in the inning. The Cowboys retook the lead in the bottom of the second by scoring one. Felstul tied the game for the Otters with a shot over the left-center fence for his first home run of the game. Breckenridge responded with another in the 3rd to take the lead 4-3. Like they have done all year, the Otters did not give up and scored three in the fourth with John Abrahams (1b), Welle (1b), and Funkhouser (1b) all getting hits and coming around to score. The Otters put the game away in the top of the fifth with 7 runs, highlighted by Felstul’s 2-run blast over the right-center field fence. In the 5th, Logan Schoon, Zender, Thielke, Josh Horgen, Fronning, and Felstul all scored.

Hitting leaders for the Otters in the doubleheader were Felstul with 4 hits, Krein with 3 hits, Jenc, Zender, Thielke, Funkhouser, Welle, and Schoon all with 2 hits, and Fronning and Abrahams with one hit each.

With the two wins, the Otters improve to 10-2 on the season and look to keep playing well at the Morris tournament on Saturday.